So Tom King’s got three 12-issue series running right now: Strange Adventures, Batman/Catwoman, and Rorschach. That last one is not something I’ll be discussing, because it’s a book that, as far as I’m concerned, is an unauthorized sequel that shouldn’t exist. The other two, though… The other two I’m enjoying quite a bit. So let’s take a look at those, shall we…?

I really wasn’t sure if I was going to pick this book up. Not because I don’t think it should exist, but because, well… King’s Batman run was extremely hit or miss for me. The major storylines left me cold. But I figured out at some point that, when he had interesting guest artists on smaller stand-alone stories… Like that three-parter set in the courtroom with Lee Weeks… Or that Professor Pyg dream issue with Mitch Gerads… Those were pretty great. They focused on experimentation, or character, or just telling a good story. And they worked.

And that’s what this first issue of Batman / Catwoman feels like to me. It’s King experimenting, and giving us interesting character moments. He may also just be telling a good story, but this is only chapter one of twelve, so the jury’s still out on that. He’s off to a good start, though. It’s the story of the marriage of Batman and Catwoman, and King tells it by jumping around between three periods of their lives: the beginning of their romance, when the Joker asks Catwoman to kill Batman for him; their present newlywed period, when they’re helping an old flame of Bruce Wayne’s find her missing son; and a period at some undisclosed point in the future, after Bruce has died and left Selina free to pursue revenge on an old enemy.

King moves very freely between these periods, often transitioning mid-page without warning. If you’re reading too fast, it’s easy to lose track of which time you’re in. Check out this transition, from pages two and three, for instance: 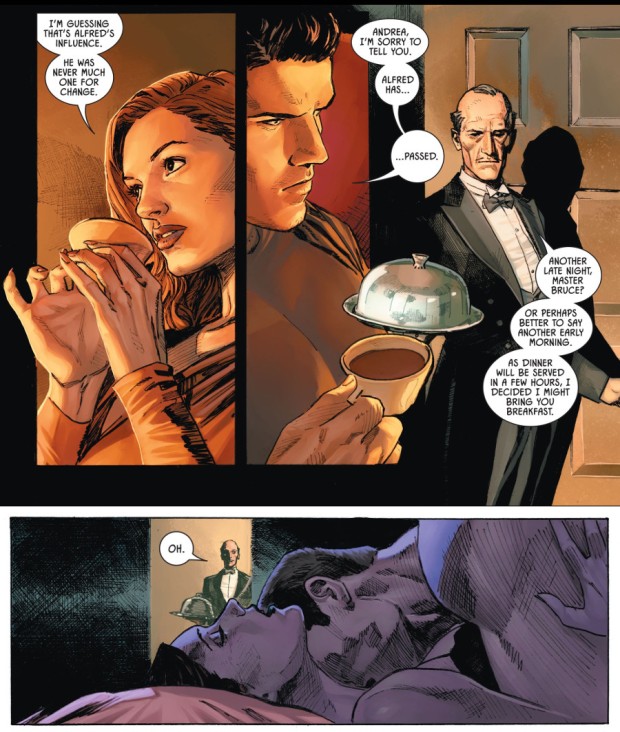 Jarring. I had to do a double-take. But that’s not a criticism. When I went back and looked, I realized that the way artist Clay Mann had laid the scene out, it was obvious that Alfred wasn’t entering into the meeting between Bruce Wayne and Andrea Beaumont. For one thing, Bruce had just said that Alfred was dead. But the Bruce panel also chops off higher than the Alfred panel, and when you look at the way they overlap, Alfred’s covered dish intrudes impossibly over Bruce’s shoulder.

So I don’t consider that a flaw. It was just a sign, very early on in the issue, that I needed to slow down and read more carefully. Clever storytelling that keeps me on my toes is a plus in my book. As I’ve said many times before, I like being challenged a bit as a reader.

And challenge is something I’ve been missing in the last year or two. With Alan Moore retired from comics, and Grant Morrison doing only sporadic pop-comics stuff while he goes off in pursuit of a career in film and television… The comics I read have left me feeling a bit… disappointed? …lately? Not that I haven’t read and enjoyed some very fine comics in the last couple of years. But few of them have offered much of a challenge, and I really want a challenge.

Or… maybe it would be more accurate to say that I NEED a challenge. And that without one… The rest of my comics-reading life is starting to feel a bit empty. The fun adventure romp of Andrew Maclean’s Headlopper, for instance, is a great counterpoint to something like the thematically-rich horror of Moore’s Providence. But without the full meal that Providence represents, Headlopper is like all-desert, all the time: it’s tasty, but not very nourishing.

Or, to give you another example… Grant Morrison’s Batman run was pop-comics to the core, but it was also densely-packed in terms of theme and narrative, and offered some of the most under-stated character work mainstream super hero comics have ever seen. And that, in many ways, made it the ideal funnybook for me. It satisfied my taste for genre fiction while also giving me something to chew on as a reader. I really loved it, in a way that I have loved few super hero comics as an adult.

Which brings us back to Tom King, and Batman/Catwoman.

I don’t think King is a writer on a level with Moore and Morrison. There’s a richness and complexity to their work that his is lacking, and I don’t get the sense that he harbors the deep love for the medium that they do. I think he LIKES comics just fine. But he doesn’t love them. He doesn’t live and breathe them. And (to be blunt) I don’t think he truly RESPECTS them, either. Frankly, I get the sense that King is kind of a jerk. But that’s okay. Dave Sim is a jerk, too, and I think he’s a freaking genius.

King’s not on that level (at least not yet), but I do think he’s quite good, under the right circumstances. In this 12-issue format, for instance, divorced from the demands of monthly corporate comics continuity, he can be quite brilliant. This format gives him time to experiment and do things with theme and character that I find quite compelling. But it also reins him in a bit, focusing his writing so that the ideas don’t get bloated or stretched out the way they did in his monthly Batman run. There, his meticulous planning seemed labored.

Here, it feels like a virtuoso performance. The story ebbs and flows like memory, one scene bleeding into the next, back and forth across time. Go back to that scene with Alfred I posted earlier. The way it’s framed, we’re seeing a memory of Alfred literally intruding on his conversation in the present-day. Bruce is saying that Alfred’s dead, but he’s also looking over his shoulder like he expects him to come walking in at any moment. And in his head… He is.

The whole issue flows back and forth like that. Some transitions are easier to follow than others, but the best of them work as echoes, with both sides of the time jump commenting on each other in some way. Sometimes, it’s not immediately clear how they comment, yet you still get the sense that a commentary is implied.

But that’s another plus for this book, as far as I’m concerned: it rewards re-reading. Any comic I can enjoy going back over, and getting more out of on the second pass, is something I like quite a bit.

Okay. Two more comments, and I’m done. The first one’s about artist Clay Mann. I’m not a huge fan of the guy. His work is often quite pretty, but it also feels empty to me. Devoid of personality. Some of the images in this issue, however, are pretty enough that I’m starting to come around.

And, finally: Earlier, I mentioned that Bruce Wayne was talking to Andrea Beaumont. She’s the old friend he’s helping find her lost son, and if her name seems familiar to you, that’s because she was the antagonist in the Batman animated movie Mask of the Phantasm.

As far as I know, Andrea’s never been seen in the comics before, but King’s bringing her in AND evidently making the movie canon. Because late in the issue, she exhumes a grave, revealing a familiar costume:

Yep. I’m liking this book more and more. It may not be on Alan Moore level, but it’s trying really hard to offer me a challenge. And I appreciate the hell out of that. 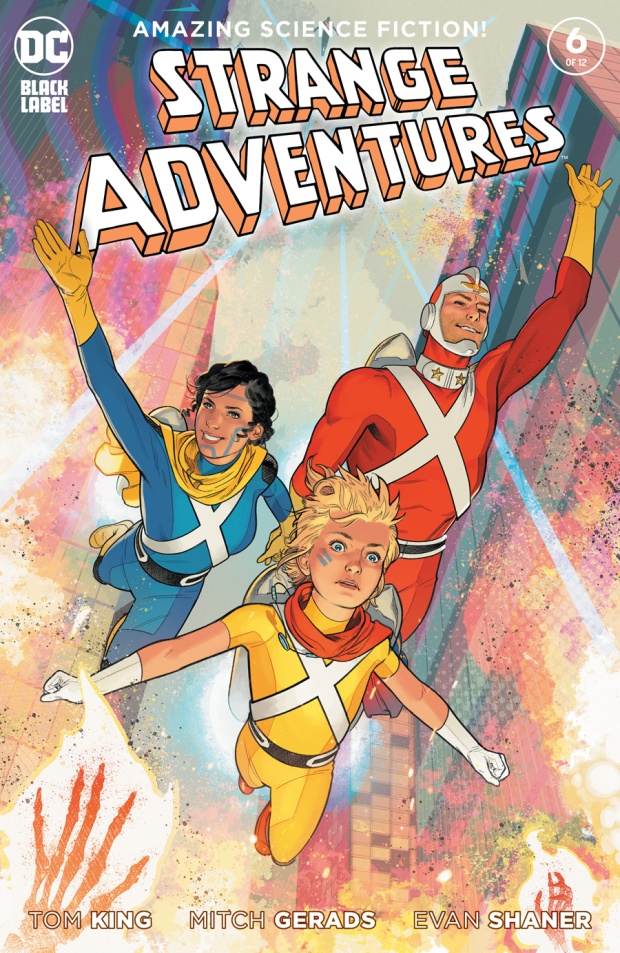 Strange Adventures is farther along than Batman/Catwoman, and in these two issues, King’s pulling off another trick that I like quite a bit: he reveals hidden truths, and those truths change the roles of various cast members from what we thought they were before.

I’m trying not to be too SPOILERY here, understand. So I won’t give everything away. But if you thought, from previous issues, that Alanna was the privileged child of outer space royalty, manipulating events to protect her husband’s good name… Well, you’re not entirely wrong about that. But she’s also an heroic innocent, a hero-worshipper so enamored of her husband that she can’t imagine him doing anything wrong.

That’s a very different role than I expected for her.

And it changes everything.

We also finally find out what happened to Adam Strange when he was a captive of the Pykkts, and let me tell you… Outer space torture is some advanced stuff.