So it’s been a while since we had time to sit down and really talk comics. And it’ll have to be a short talk, even now. But the constant grind of work, pandemic, and politics is starting to have some deleterious effects on my psyche, so… Let’s talk comics for a minute. I’ve got a big pile of books to discuss here on my desk, and I don’t even know where to start. Oh, wait! Yes I do! 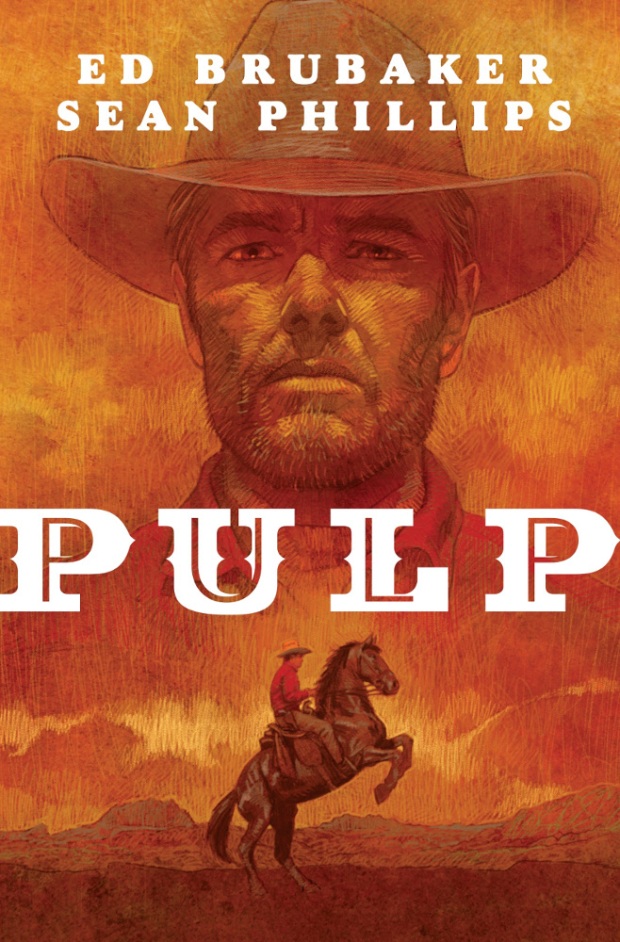 The current masters of funnybook noir have released their latest OGN, a Depression-era tale about an aging Old West gunslinger, living under an assumed name and eking out a living writing fictionalized versions of his own exploits for the pulp magazines. I like that premise quite a bit. The Old West and the Great Depression are so far removed from each other in my mind that it doesn’t seem possible. But the two periods really aren’t all that far apart. The days of the American Frontier don’t officially end until the early 1900s, so it’s entirely possible that someone who lived through that time would still be alive and kicking in 1939. The vast gulf separating them in my mind is really just the difference between the frontier and the civilization that naturally follows it. But Brubaker and Phillips point out that maybe the difference isn’t as big as you’d think. 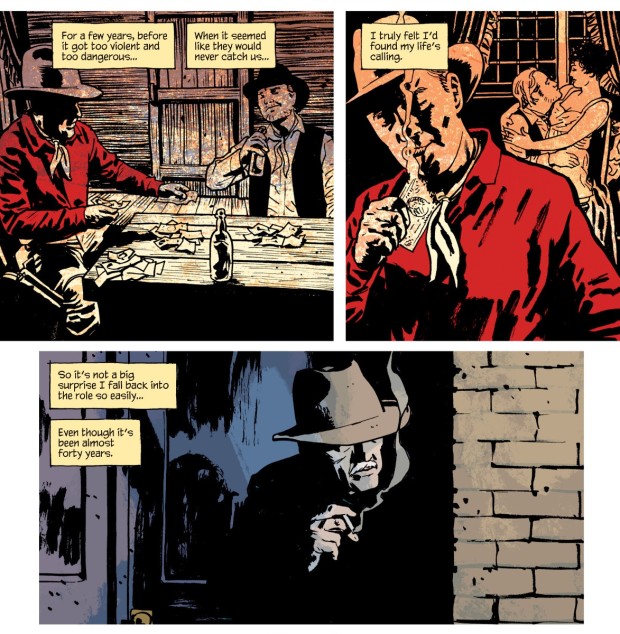 I created that transition in Photoshop, by the way. The panels do follow each other, but the Old West stuff is the end of one page, and the Depression stuff is the beginning of the next. I wanted to use that moment, because it illustrated my point, but went looking for something else when I saw that it wasn’t on the same page. Then I noticed something that I’d missed on the first read:

The Old West and the Depression are ALWAYS on separate pages, and look entirely different. The Old West sequences are in full bleed, and colored in vivid reds and oranges. The Depression sequences, meanwhile, have full panel borders all the way around the page, and are draped in shadow and shades of gray. They’re restricted and colorless, in other words. Smaller. While the Red River Kid’s life of violence and whores is wide open and burning hot with life. The two do intersect at one point, but that page is far too spoilery to share. Rest assured, though, that some of the shocking Old West color finds its way into the Depression before it’s all said and done.

That intersection happens because, while Red knows that his outlaw days had to end, and that he’s better off happily married with that life behind him. But part of him still yearns for it, even as he rejects it. Of course, as you can see above, he still returns to his criminal ways when times get tough. His page rates are falling and his editor’s screwing him out of the rights to his own life story. Then he gets mugged in the street, has his last hundred bucks stolen, and suffers a near-fatal heart attack. He’s about as low as he’s ever been when he’s approached by a former Pinkerton agent who’s figured out who he really is, and who wants Red’s help pulling off what he describes as a righteous robbery: 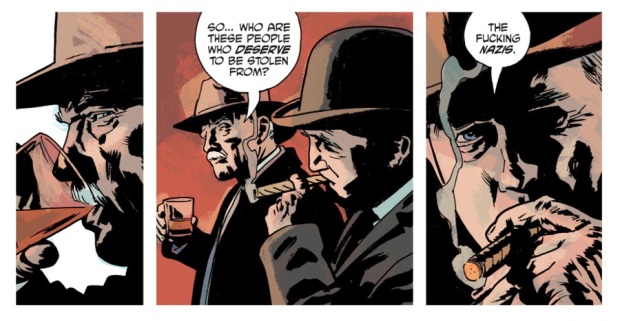 Which, you’ve gotta admit, is a pretty great hook. It gets Red, certainly, and it also got me. I read the first half of PULP one morning before work, and was looking for a stopping place before I ran out of time. When I hit that line, I knew I’d found it. And I snapped the book shut with a smile. You couldn’t ask for a better place to stop, or a better line to ensure that you came back and finished later.

So, yeah. This one’s got all the usual Brubaker/Phillips marvelousness: regrets, yearning, bad decisions, crime, a desperate hero with a terrible weakness, and the greatest villains in human history. It’s a good story cleverly told, with a hero and a setting that I never thought possible. It’s not perfect, but its flaws are small, and not really worth talking about.

And I am swiftly running out of time already, but I did have one other book I wanted to mention before we go…

This book took me completely by surprise.

It’s filled with pleasing, design-oriented cartooning that simultaneously puts me in mind of Chris Ware, Brandon Graham, and Paul Grist, without really looking quite like any of them.

It has space opera action sequences drawn out across 35-panel grids that flow up, down, and diagonally.

It has aliens and giants and farmers and circular panels and a whole planet made up of repeating geometric shapes.

It is kind of impossible to describe, and I’m going to need another reading before I entirely understand it.

But I do love it dearly, and highly recommend checking it out.

2 Comments on Cowboys and Nazis and Giants and Aliens