So I used to wonder why there weren’t more Neal Adams comics. I mean… He has a respectable body of work, don’t get me wrong. But for a guy who pretty much ruled comics art in the 70s, you’d think there would be more actual complete comics. While there’s tons of Adams covers, his interior work is more rare, and I used to wonder why that was.

The answer, in part, lies with this image I posted a couple of days ago on Dork Forty social media: 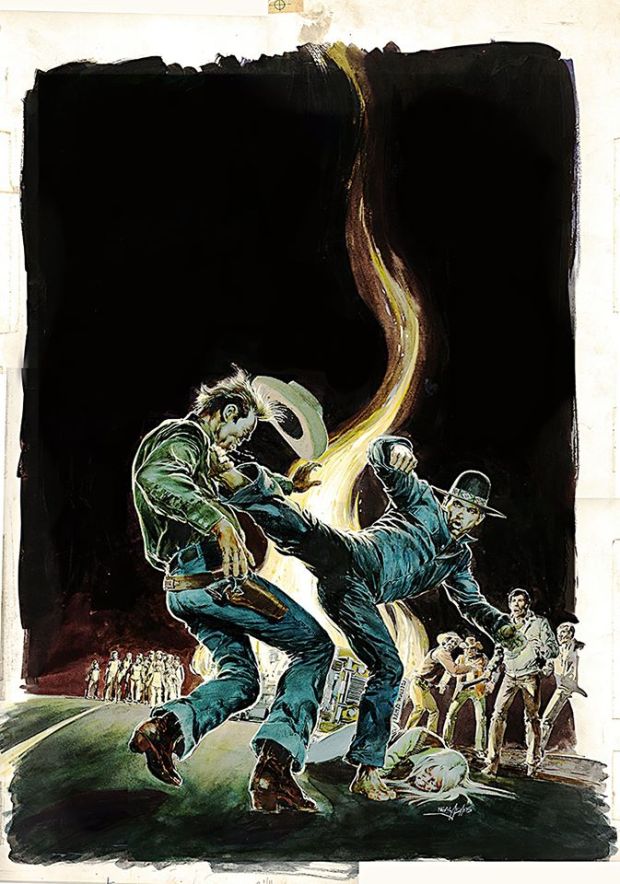 That was done for the cover of Deadly Hands of Kung Fu #11, and it’s a pretty kick-ass Billy Jack illustration. Now, Deadly Hands was one of Marvel’s black and white magazines, and Adams graced its covers several times over its run.

But that’s still comics, ultimately. Deadly Hands may have been printed in magazine format, and it may have had text pieces about kung fu movies, but it was still mostly funnybook stories. And, as we’ve established, Adams did endless cover work in the 70s. But the reason he did so many covers is that he found it more lucrative to split his time between the comics medium (which he loved) and more traditional commercial art, which he took on through his studio Continuity Associates.

And that’s where the kung fu connection comes in. Because one thing Adams did through Continuity was poster art for kung fu movies. And, man, did he ever do a ton of those. 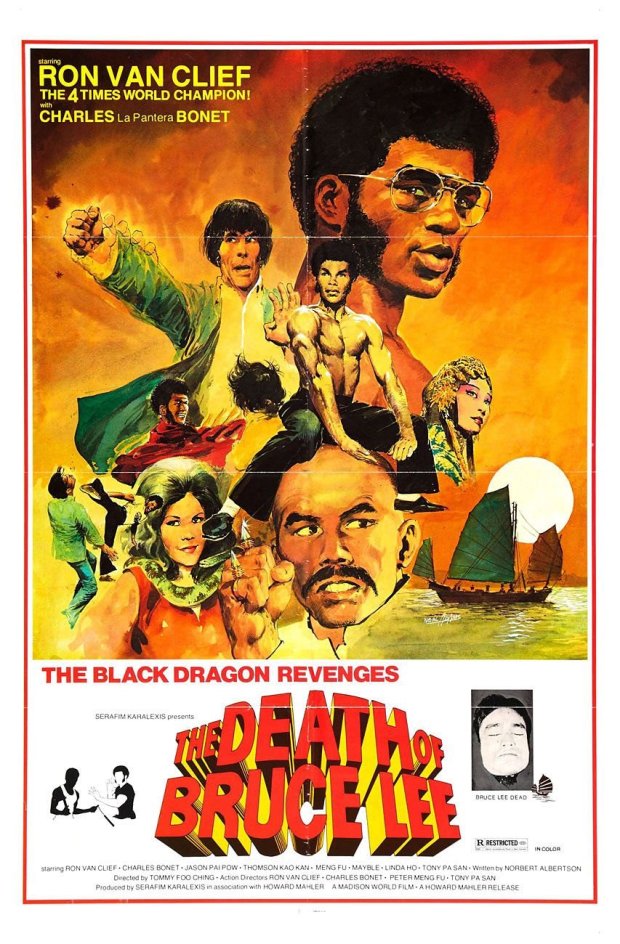 Heh. I like Death Promise, in particular. I’m sharing the original art there, because it’s the best version of the image I could find. But the actual movie poster also includes the tag line, “Filthy Rich Landlords Get Away With Murder. It’s Time They Pay For It!” Which puts the rats and the terrified white dudes in proper context. Nothin’ like the 70s for a little of that Fight the Man spirit!

As you might guess from these examples, these were not especially… CLASSY movies. But cheap drive-in fare was a big part of what made the 70s the 70s, so it’s only fitting that Neal Adams was there in the middle of it. My favorite of these posters is probably this one, which combines the kung fu movie craze with the biker movie craze: 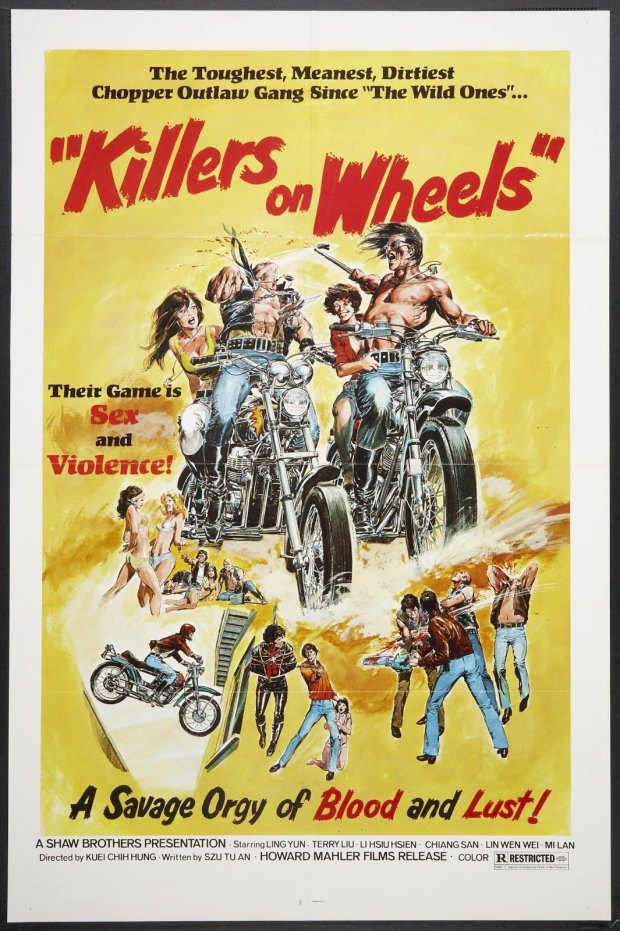 (I have never seen this movie, by the way. But, come on! The Shaw Brothers? Doing kung fu bikers? That’s gotta be a low budget spectacular!)

But it wasn’t all just kung fu. Oh, heavens no! Here’s another schlock cinema favorite that Adams gave a far classier poster than it deserved:

Heh. When Richard Jaeckel gets star billing, you know you’re watching a classic!

Adams didn’t just do B-Movie posters, however. I was shocked to discover that he also did posters for Westworld: 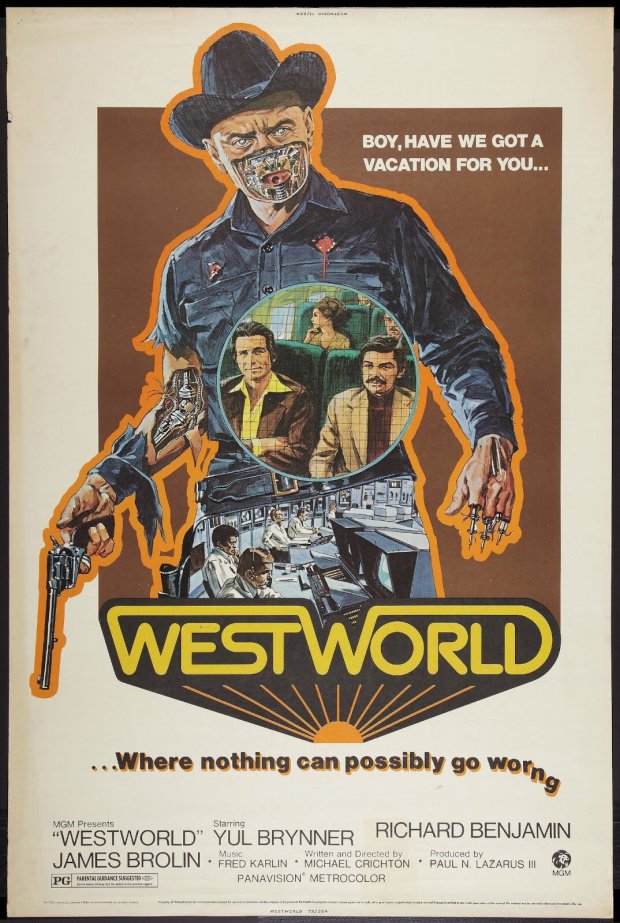 I’ve seen both these images for years, and never knew until recently that they were Neal Adams. You can see it in the first one, I think. The James Brolin and Richard Benjamin figures look like Adams’ work. But that Yul Brynner cowboy? I’d never have guessed.

Another poster I never knew that Adams was involved in is Phantom of the Paradise. And that’s because that poster is by Richard Corben.

I never knew that Corben had done that poster, either, until fairly recently. But when you look at the lady in the background, it’s pretty obvious. Duh.

But Corben didn’t do this one alone. Because he was working from a Neal Adams layout:

Pretty cool. And some of the stuff Adams was doing with light and character there makes for a nice segue into our final two movie posters for tonight, which caught my eye for a very specific reason: Bill Sienkiewicz. As you may know, Sinekiewicz started out as something of a Neal Adams clone, and he was very good at the style. But in the mid-80s, he started experimenting with form, and his art turned into something very different.

Well, these two Adams pieces really put me in mind of Sienkiewicz, and I have to wonder about them. First up is this poster art for a 1978 Jackie (or rather, “Jacky”) Chan flick called Eagle’s Shadow (aka Snake in the Eagle’s Shadow). 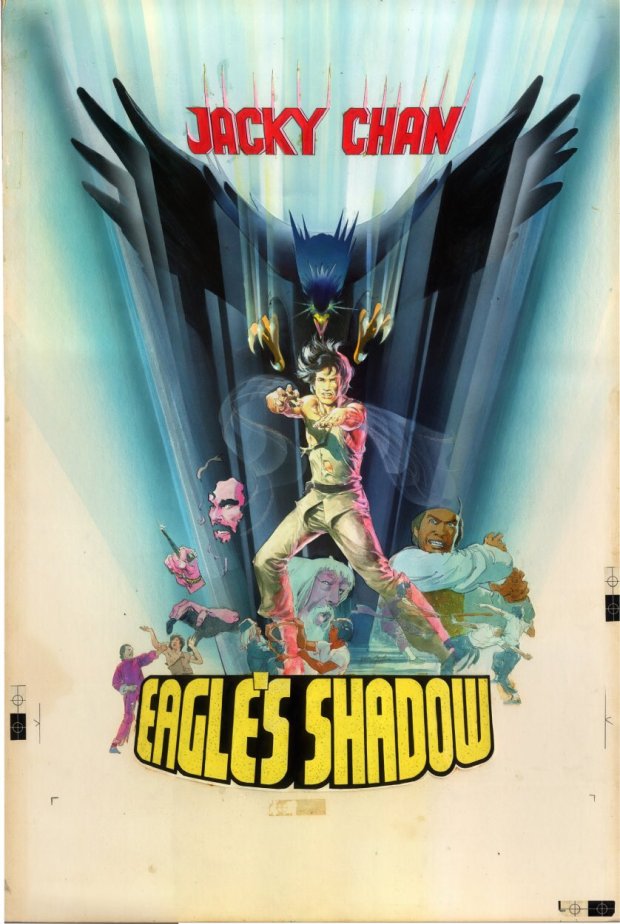 I haven’t been able to find out much about this image. It has the look, to me, of something done after 1978. But if it was done for the film’s initial release, that would be Adams doing Sienkiewicz before Sienkiewicz! It’s not as extreme, of course. But some of the color and figure work really put me in mind of things Sienkiewicz wouldn’t be doing for another decade.

Then there’s this unused art for the 1991 Robin Williams movie Hook:

That’s from after Sienkiewicz became Sienkiewicz, of course, but it very much has the look of things I’ve seen him do.

Eh. Maybe I’m over-thinking it. The similarities were just interesting to me.

Alright. So we’ve established that Neal Adams has done a lot of movie poster work. But the thing that started me down this rabbit hole of his work outside comics wasn’t posters. It was paperback novel covers.

My local library had a bunch of these Tarzan paperbacks when I was in maybe junior high, and the cover art always made them seem too thrilling to pass up. I didn’t realize it was Adams at the time, which seems crazy to me now. I mean, he’s definitely working out his inner Frazetta on these things, but still… That’s clearly Neal Adams.

Anyway. The original painted art for many of these is floating around out there online these days (you can see many of them here), and it’s even more impressive without the trade dress. I’ll leave you, then, with a series of Neal Adams Tarzan covers. Study them, and drool… 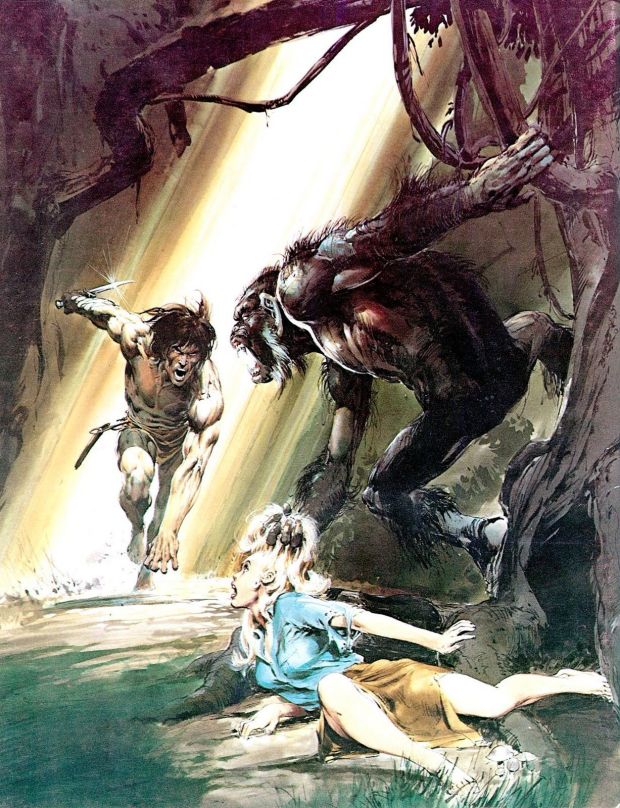 Volume 1: Tarzan of the Apes 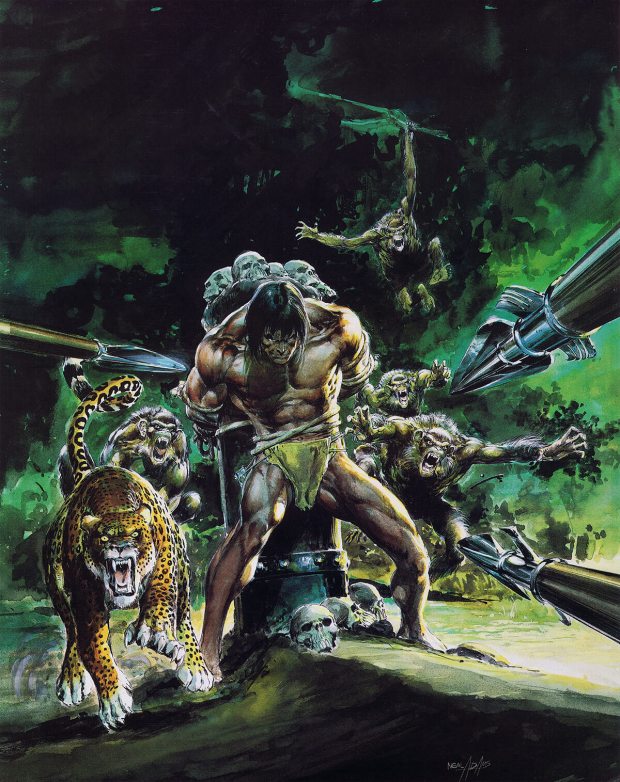 Volume 3: The Beasts of Tarzan 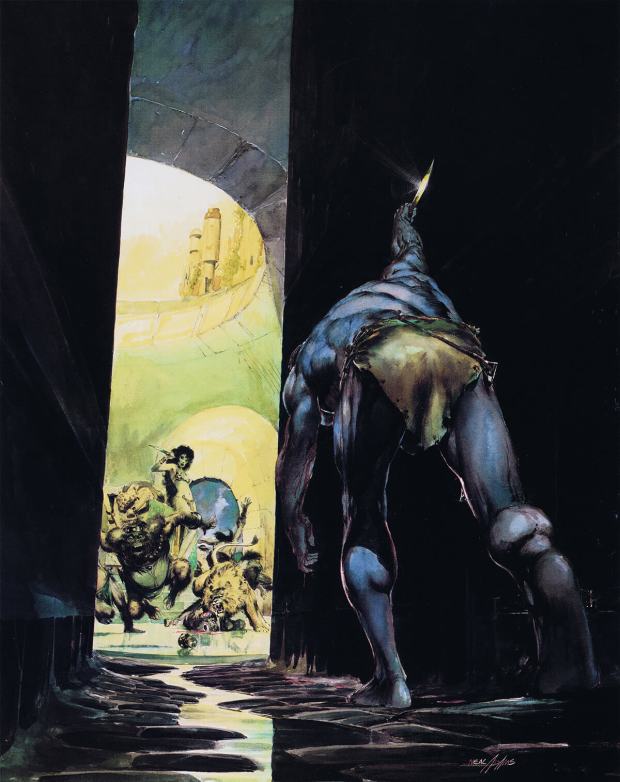 Volume 5: Tarzan and the Jewels of Opar 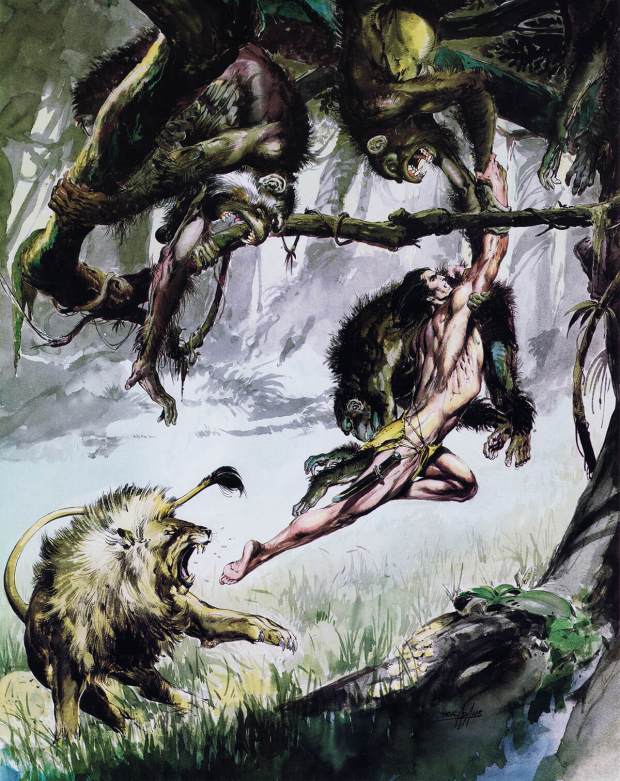 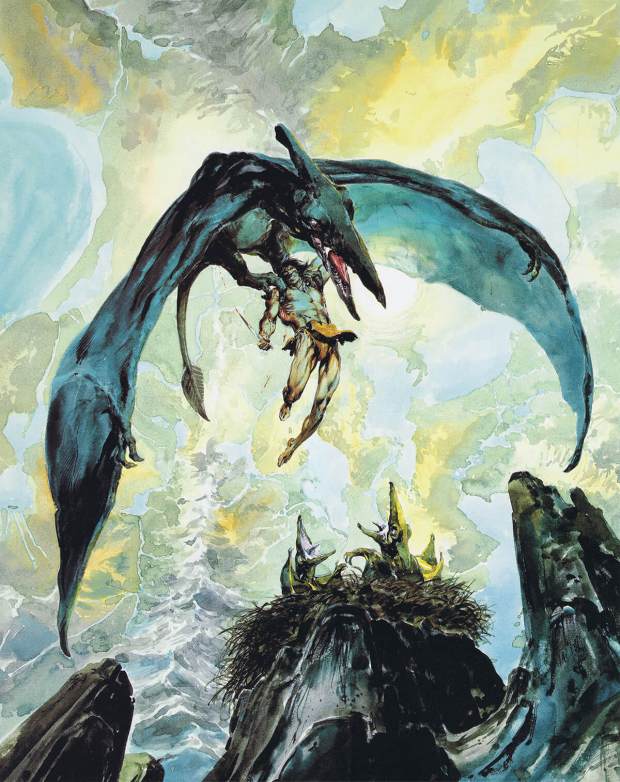 Volume 13: Tarzan at the Earth’s Core

Volume 17: Tarzan and the Lion Man

Volume 18: Tarzan and the Leopard Men