So real life’s been getting in the way of nerd farm business a lot lately, and this week is no exception. But people are more important than funnybooks, so I’m okay with that. Besides… It allows me to share pretty pictures that my usual long-winded ramblings don’t allow. Like the Al Williamson Empire Strikes Back Artist’s Edition.

If you’re not familiar with the Artist’s Edition format, these books reproduce original black and white comics art at the size it was drawn. So what you’re getting is the original art boards, usually with full inks and letters, just as it was used for printing. It allows you to see fine details of the artist’s work, especially in the case of art with fine linework or screentone that might have been obscured by the coloring process.

I own a few of these (the Wally Wood EC Comics edition being a prized possession in particular), and lust after a few others (the David Mazzuchelli Daredevil volume comes to mind). And I had the opportunity, I think, to get this Al Williamson book, too. But I passed on it because I just didn’t want to spend the money (these giant hardcovers being a bit on the pricey side). But I had the chance to see some pages from it this week, and man…

What’s the opposite of Buyer’s Remorse? Spendthrift’s Envy?

Anyway. The Archie Goodwin / Al Williamson adaptation of The Empire Strikes Back is one of my favorite comics from childhood. It was published across four issues of the on-going Star Wars comic, but I had the whole thing in the magazine-sized “Marvel Super Special” edition.

I read that comic literally to pieces. It was held together largely by scotch tape and love by the time I got through with it, because I had pored over every page, every image, every word, more times than I can remember. I recorded a radio play version of it on my little flatbed tape recorder, I loved it so much.

(And if that’s not the dorkiest thing I’ve ever admitted, it has GOT to be in the top three.)

So, yeah, I loved it. And (other than being as Star Wars crazy as any other kid of my generation) Al Williamson’s art was a big part of why. Williamson was an EC Comics veteran who’d also gone on to do Flash Gordon, Secret Agent X-9, and innumerable other classic comics work. If you’re not familiar with him, go here to educate yourself. He’s a giant, and his work on The Empire Strikes Back makes it easy to see why (especially if you click on these images to embiggen them). 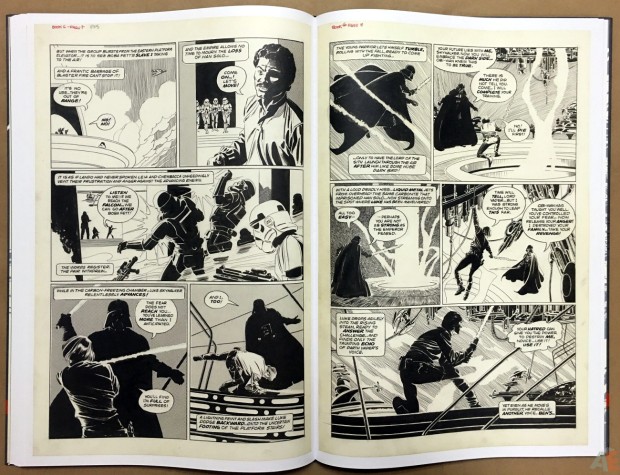 Hot damn, but that’s the whole magilla, ain’t it? Mood, tone, lighting, staging, pacing, dynamic figure drawing… Williamson was a master. His likenesses look more like the actors to me in my head than the real actors do. And could he have possibly made the bounty hunters look any more bad ass and cool? Even Dengar looks awesome!

Note also how effective his screentones are. He used them for texture on the asteroids, but also to capture the lighted walls behind Luke and Vader early in their duel. He also knew when not to go with screens, though, as you can see on the very next page, where he laid in tons of lines to give his backgrounds a misty texture. Williamson was extra-good at mist, though. Those Cloud City pages must have been heaven for him.

I got most of those images from the great AE Index site, by the way, where you can see more pages from Williamson’s Empire, and tons of other Artist’s Editions as well.

A couple more things, and I’ll go. As good as Williamson’s work on this book looks in black and white, it also got a great color treatment, so I wanted to show you a little bit of that, too. 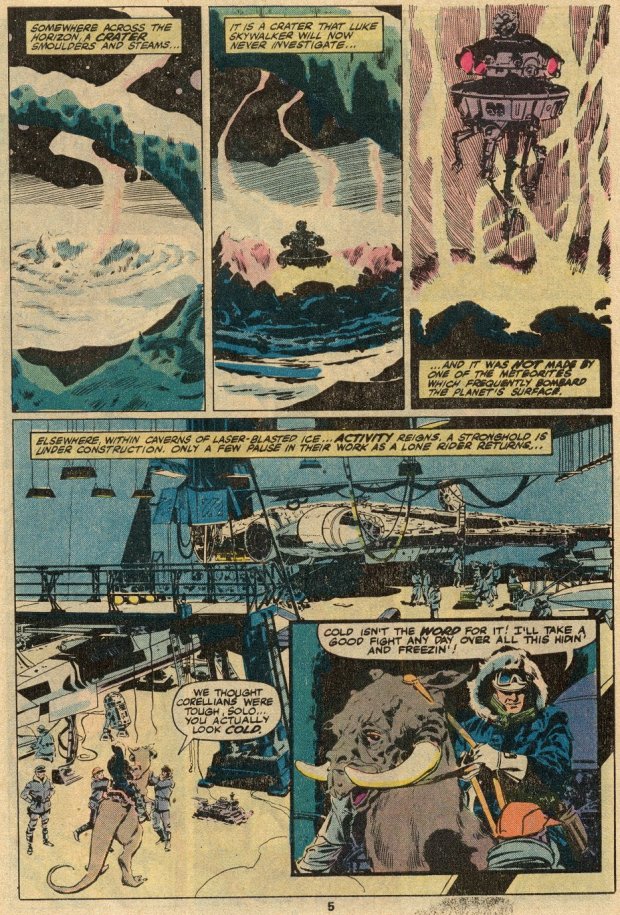 That whole page is good, but I’m particularly fond of the panels with the Imperial Scout Droid. Moody goodness! The Wampa cave page isn’t as nice…

…but I am awfully fond of the way the green merged with Williamson’s linework on that foreground stalagmite in the first panel.

The other cool/weird thing about this Empire adaptation is that they were initially working off script descriptions and production drawings, so a few things changed between the comic and the film. Especially in regards to Yoda.

That’s the original Yoda design on the left, which Williamson had to go back over and re-draw after the final puppet design was settled on. One kind of charming oddity remains in the book, though: Yoda is also TINY. Check out this spread: 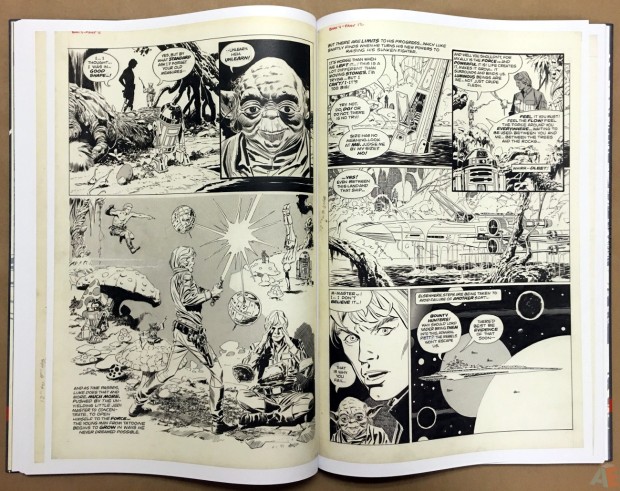 Looks like he’s about eight inches tall! So weird and cool! I kinda wish they’d made him that tiny in the movie.

Aaaannndd… Okay. I’ll shut up about this now. Hope you enjoyed it, and we’ll be back next week with a more traditional round of endless yammering!