Holy crap last week was a great week for funnybooks! Lots of variety in tone, topic, and aesthetic, with everything from grounded spies and dystopian futures to hyper-kinetic crime and meta-fictional sci-fi horror. AND ALL OF IT SO GOOD! There were so many good books, in fact, that I despair for the rest of the month. But SCREW YOU, FUTURE! Because right now… RIGHT NOW!! …we are rollin’ in the good stuff!

Okay, so yeah. As long-time readers know, I’m a pretty easy mark for a Grant Morrison comic. But I’ve been a bit worried about his stuff, of late. His best work seems to have been poured into Batman (a worthy character, to be sure, but come on), while his original works have been a bit wanting (Happy! is probably my least favorite Morrison comic).

This, though… This is nice. Not completely unfamiliar territory for Morrison (we’re still dealing with the connection between imagination and reality), but I’m digging the context. It’s the story of a debauched horror writer, struggling with depression and a lack of inspiration, seeking ideas in his new home, a haunted Beverly Hills mansion with a Satanic history. What develops is an exploration of Void Horror, the crushing existential dread of emptiness, served up with a splash of sci-fi pulp ridiculousness in the adventures of an evil hero with the positively Dickensian name of Max Nomax.

It’s not Morrison at his most subtle.

But that’s okay. Because, despite its somber title and subject matter, Annihilator is a comedy as much as anything else. Our Hero (the writer, not Nomax) is shallow, if not a bit of an idiot, and there’s humor in his problems. The self-negating name of his protagonist captures his situation well. Which is to say, it’s as preposterous as it is horrifying.

The whole thing’s also very meta, of course (did I mention this was written by Grant Morrison?). Nomax may or may not be a real person, an imagined personality who’s attained sufficient weight to impact the real world. The series is also a gentle skewering of Hollywood culture, probably says a thing or three about the relationship genre fans have to their favorite fantasies, and makes explicit commentary on the high power of low fiction:

Heh. That was the best moment in the issue, to me. It’s pretty much exactly the reaction I had when I read Morrison’s Final Crisis a few years back, and his narrative flights of fancy about the machinations of Darkseid both excited me and made me cackle at their excess. Nice to hear that he might have had a similar reaction to writing it.

That artwork up there is by the brilliant Frazer Irving, whose work might best be described as “luminous,” especially here. He’s doing a lot with light on this book, appropriate to the story’s setting (famously sun-drenched Los Angeles), but also appropriate considering its preoccupation with black holes. There may be one of those in Our Hero’s head (or it may be a brain tumor), and Irving’s staging shows us the world as warped by its gravitational pull:

And that’s all I think I’m gonna say about the book at this point. I’ve got theories (OH, do I have theories), but unlike my usual meanderings about Morrison comics, I think I’ll let him develop his themes a bit more before I go off on public literary analysis.

Suffice it to say that Annihilator is fun comics about depression, with a nasty, black, 2000-AD-ish sense of humor… 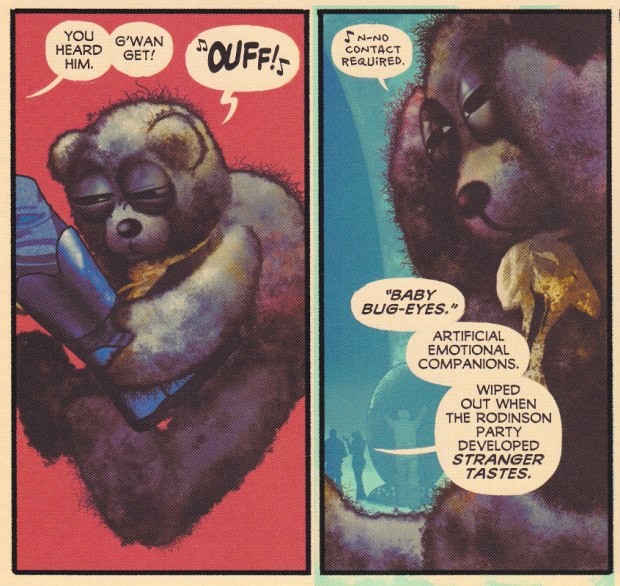 Moving to the other end of the tonal spectrum, we have the latest installment of Lazarus, Greg Rucka and Michael Lark’s dystopian political sci-fi drama. Though it’s rather humorless, Lazarus is nonetheless a joy to read. Rucka’s done his homework here, grounding his story in cutting-edge science and current events to make it as convincing a future as possible.

This issue revolves around political machinations between the world’s ruling families, how the powerful use laws and treaties (and even their own flesh and blood) to get the results they want. I won’t delve into the details of the plot here; it would take more time and space than I have to explain it all (though each issue does have a tidy summary of events on the inside front cover to help new readers get up to speed). But suffice it to say that the story moves forward less with lurches of shocking revelation than it does with the inexorable progress of a chess game.

This is not to say that there are no surprises or thrills. It’s quite exciting when another family’s Lazarus shows up at the Carlyle border (though the cover makes her confrontation with Eve look a bit more like a Kurosawa film than it turns out to be). But the real shock of the issue is a far more quiet one that reveals Jacob Carlyle to be even more Machiavellian than I’d suspected. And I’d suspected quite a bit.

So while this book doesn’t soar to the sort of artsy heights that most excite me as a reader, it is rock-solid political intrigue and character drama. And I dig that, too.

Swinging back toward comedy, we get the new issue of the best spandex book on the market. That’s right. I said it. Nothing else coming out of mainstream spandex fiction right now really comes close. Maybe Morrison’s Multiversity, but the first issue of that honestly felt a little tired to me. I may come around once it gets wound up good, of course, but in the meantime… Hawkeye is The Book To Beat.

This issue wraps up Kate Bishop’s California adventures in preparation for the big series finale that’s coming up all-too-soon, and… you know… much as I’ve bitched about these stories over the last year… now that they’re over, I kind of think they should have gone on a little longer. Not that Fraction doesn’t bring things to a satisfying conclusion. He does. And not that this final Kate story is suddenly as good as the Clint stories. It’s not. But it still feels like a plotline that was originally intended to go on a bit longer.

Or, I don’t know. Maybe it was something that wasn’t planned at all, but became a necessity to keep corporate happy during the long gaps between issues with artist David Aja. Maybe he’d intended to just kind of run with it until it was no longer necessary, then wrap it up quickly. And, with Fraction and Aja (and hopefully their publisher) closing up shop on the book so soon… Maybe it was time.

But, damn. Just when Annie Wu starts turning in art I really like (because this issue looks really nice)… 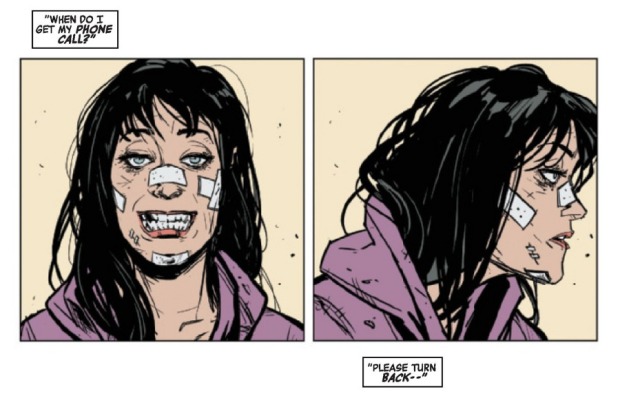 Ah well. Such is life. Bring on the finale!

East of West 15, by Jonathan Hickman and Nick Dragotta 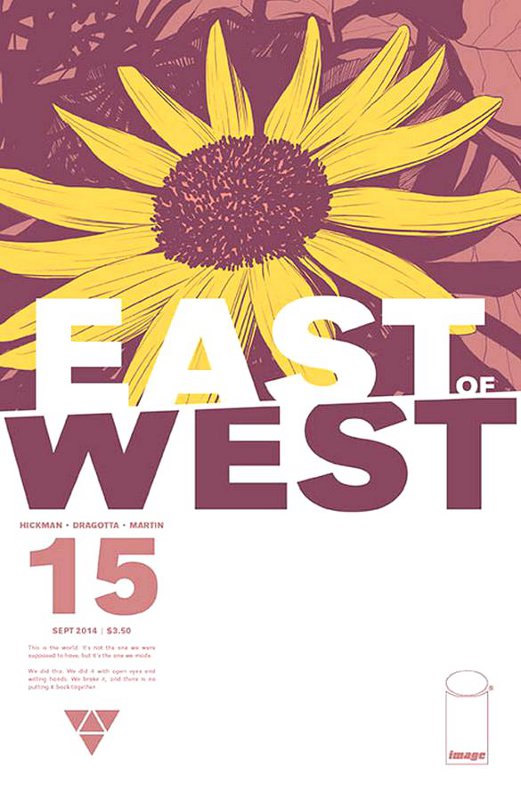 I think it is.

Has its promise of apocalypse been met? 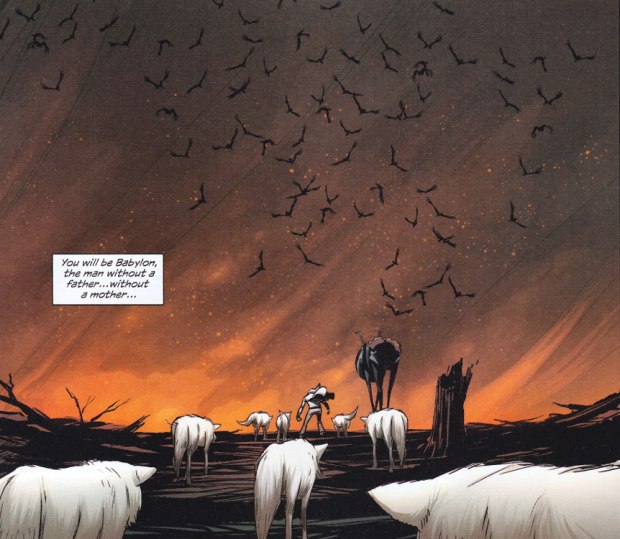 I think it has.

And does the book’s weird aesthetic blending of Katsuhiro Otomo and Sergio Leone now embrace Hiyao Miyazaki as well?

I think it does. 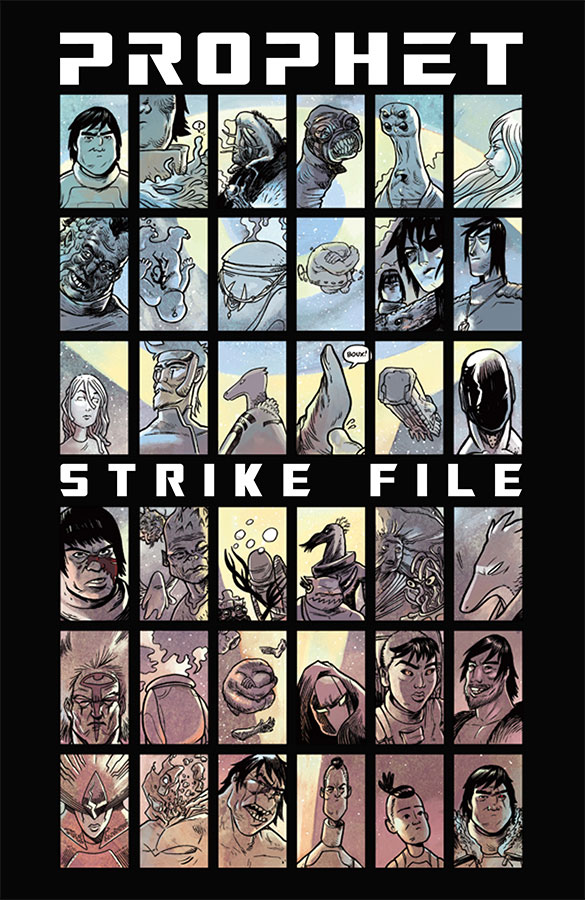 I’ve said before that I don’t ever really want this book to make complete sense. It’s at its best, I think, when it hints at its convoluted past and complicated present, giving you all you need to know but never fully explaining anything. It lends the air of myth to the book, and maintains that sense of the alien, of the other, that is its primary appeal. I mean, I want to know all that stuff, but I’m a smart enough reader to know that I probably shouldn’t get it. Too much explanation, after all, would reduce the series to the level of everyday space opera. And that would be a shame.

So it was with equal amounts of trepidation and gleeful abandon that I tore into Prophet: Strikefile, a handbook to the future world of Prophet, its characters, and its history. The history, in particular, gets covered, in an opening 10-page sequence covering the rise and fall of the Earth Empire, and Old Man John Prophet’s role in the great war that brought it down. This sequence worried me the most going in, but it’s a perfect example of how well the Strikefile walks the line between explaining the series’ background and maintaining its weird-ass appeal. Because, though it does tell us things we didn’t know before, it doesn’t read like exposition written to satisfy reader curiosity. So while I now know that Old Man Prophet actually grew other free-willed Johns to fight the Earth Empire, that information only serves to make the vast Prophet epic more bizarre.

And that’s how most of the Strikefile goes. There are explanations of various and sundry items, like the Dolmantle or the weird bubblegum-colored giant space baby suits, and those do offer clarification of small bits of weirdness that I didn’t entirely understand before. But for every feature like that, we also get something like this: 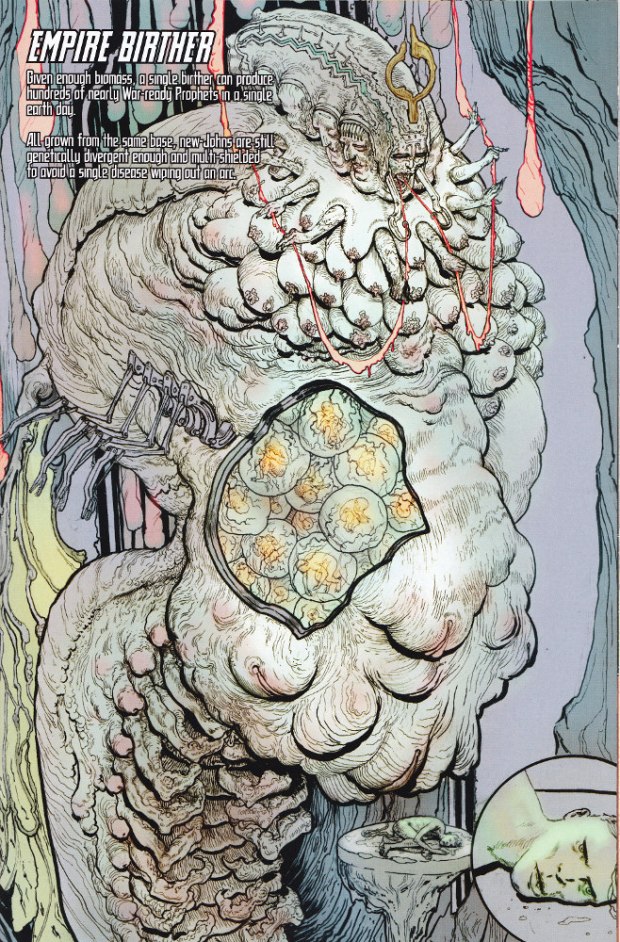 Which… Holy crap. I might now know more about Earth Empire Prophet birthing methods, but… My god! That process is WAY wronger than anything I might have envisioned for it!

And that is exactly what I want out of this book to start with.

Back to the more grounded stuff here, with the latest installment of Brubaker and Epting’s letter-perfect spy thriller. We have a bit of a departure in this chapter, though: rather than focusing on Velvet herself, this issue turns things around and shows us what her former allies have been up to while she’s been busy giving them the slip.

It’s a nice fleshing-out of the cast, and a needed outside look at Our Heroine. Because Velvet’s her own biggest critic, and it’s sometimes easy to lose sight of how very good she is. But from the perspective of the men who are pursuing her, men who haven’t seen the mistakes Velvet sees herself making, she’s some kind of mystery genius. And that’s a good sort of thing to see.

Also good to see is Steve Epting keeping the quality up on the artwork. I understand that the level of work he’s putting into these pages is making the book run a little less than monthly, but that’s fine by me. He’s turning in what might be the best realist artwork in comics today, and I’m willing to wait for illustration so pretty as this. It makes Velvet feel like a classic, and that’s worth every minute it takes the man to do it.

Alright. Running out of time here, so these final two reviews will have to be brief…

Powers Bureau 11, by Bendis and Oeming 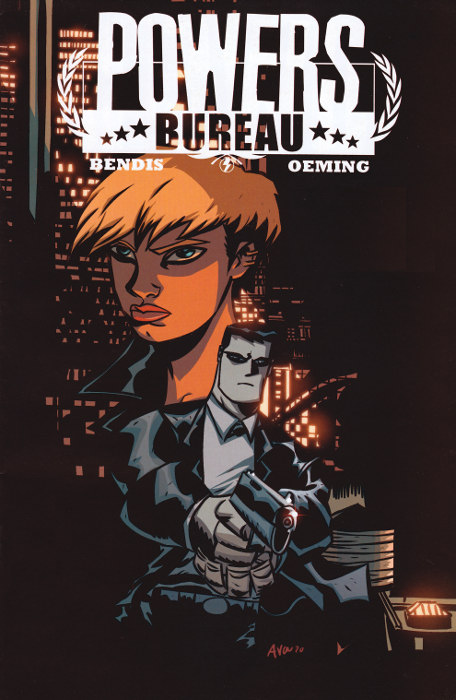 This book’s been on a roll lately, and this issue continues the trend. Action! Excitement! Danger! Revelations! BIG revelations. Revelations of the type that could (and maybe should) bring the series to an end.

I’d be happy with that, in fact. Yeah. Yeah, the more I think about it, the more I think that if Powers ended its run in another issue or two… one more story arc, maybe… wrapping up everything currently in play… which includes all the major themes and plotlines that have been running through it for its entire history… Yeah. Yeah, that wouldn’t be a bad way to go out at all.

There’s something to be said, after all, for going out on a high note.

United States of Murder Incorporated 5, by Bendis and Oeming 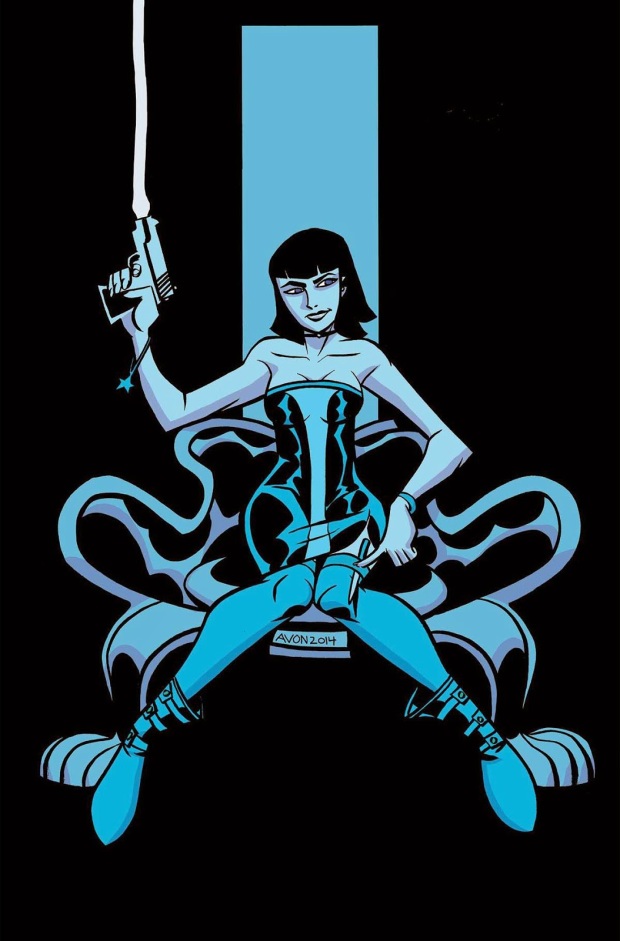 I want to like this book more than I do. It’s not bad, just very hit or miss. There are things in this issue that I liked, and some things that I thought were kind of inept. But there’s nothing in it that I loved. And that makes it the week’s one disappointment.