First up, we have Multiple Warheads, a comic about a road trip through post-nuclear Russia, undertaken by former organ-smuggler Sexica and her boyfriend Nikolai. The story is loose at best, but it’s Graham’s execution that makes it worth reading. This is a book just jam-packed with stuff. Even if the story’s a little light, I still feel exhausted after reading an issue simply because Graham has put so much in there. Visual puns abound, but so do great little details about life in this weird post-nuclear world. Even something as simple as a bathtub faucet becomes fascinating when the art includes a little cross-section of all the stuff it filters out:

I’m not sure why the “Spirit Breaker” filter is needed as yet. I’m not sure it matters, to be honest. Though it does seem that Our Heroes may have road-tripped their way into a haunted city, so… Who knows? And speaking of that city, it’s the subject of an insanely detailed two-page spread that showcases Graham’s talent for complicated backdrops: 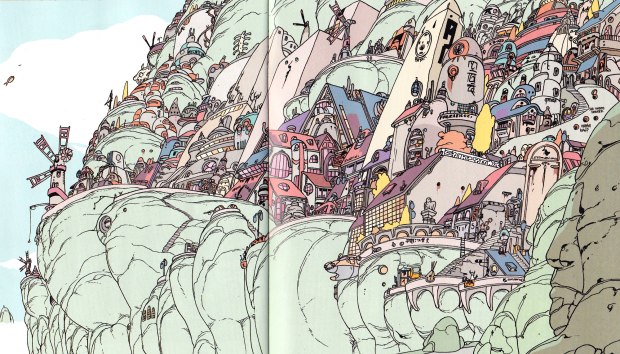 I know I always tell you to embiggen pictures, but this time… seriously. Do it. Every little house is detailed in that drawing, and there’s graffitti so small that you can barely read it, even at full print size. But it’s still there, as fully-realized as in any of Graham’s close-up street scenes. The issue opens with one of those, and it does for traffic what the above picture does for city skylines: 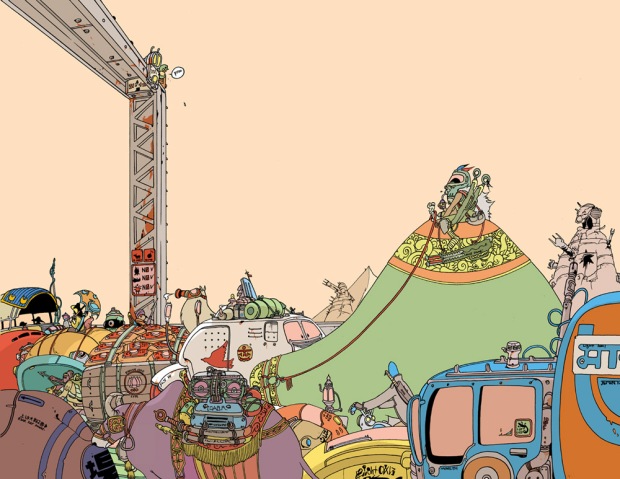 That’s the opening two pages of the issue, by the way, with the left side of the image printed on the inside front cover. It serves not only as an establishing shot for the opening scene, but also as a very nice frontispiece. Graham’s work often seems equal parts manga, Moebius, and grafitti art, and you get a little bit of all that here. I like all the detail, of course, but I’m equally impressed with Graham’s confidence in using the empty space at the top to balance out all the clutter. We’re right back into the midst of that clutter with the next page, though, as the issue’s action begins:

The woman on the motorcycle is an assassin named Nura. I have no idea what her connection to Sexica and Nikolai might be, but her attempts to assassinate a nobleman thus far make up whatever plot the series has.

That’s not a criticism, understand. Much of Multiple Warheads’ appeal is in its freewheeling, jokey nature. If Graham never gets around to connecting the above scene to Sexica and Nikolai’s road trip, I think I’m okay with that. I have still been entertained.

Y’know… I was worried that some of this book’s charm might wear off once the story started making a little more sense. But now that it has, I find that I’m not really enjoying the book any less. And it’s not getting any less weird, either. This issue takes place in a city settled on the corpse of a space giant, where they mine his body for meat. So, yeah. The Meat Mines of Ixpolliniox are a-okay in my book.

I also got something of a shock this issue, as the story took a turn toward an entirely different kind of weird, as Old Man Prophet meets with a mysterious, shadowy figure to discuss their future plans, and he has this to say:

Whoa! I know that Prophet and Diehard are old Rob Liefeld characters rendered weird, but… Badrock?! Holy crap! That officially makes this a Youngblood reunion comic! Especially when you realize who Old Man Prophet’s talking to in that scene: Troll. Who used to look like this:

…but who, under the tender mercies of Brandon Graham and Simon Roy, now looks like this: 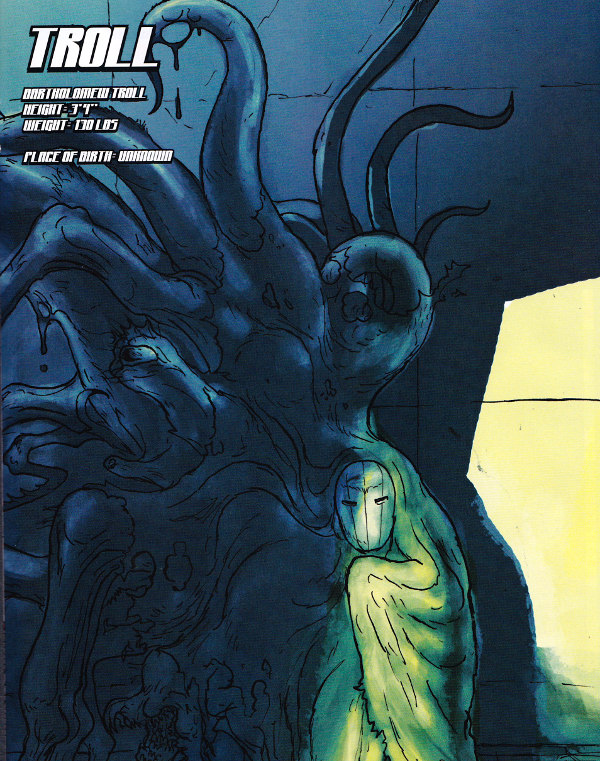 (Well, his anatomy’s no less human, I suppose…)

I can only imagine how this book must feel to someone who grew up reading Rob Liefeld comics in the 90s. Probably not too dissimilar from how it much have felt for fans of the old Charlton super hero books felt when they got their hands on Watchmen, I suppose. Except with more meat-mining and lizard sex… 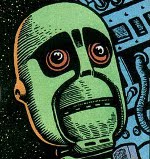